Every domain name in the world is part of the DNS system.

Now, to keep these DNS records in order, a DNS zone has been created.

So, let us understand what a DNS zone is and how it is created.

What is the DNS zone?

A DNS zone is a distinct and contiguous administrative portion of the DNS namespace.

It means that the portion of the DNS namespace management and administrative responsibility has been delegated to a legal entity (manager, organization, company, or individual).

Moreover, the DNS zone can also be defined as the administrative function with granular control over DNS components, such as authoritative name servers.

You can follow the tutorial on how DNS works and DNS Records and the type of DNS records for complete guidance.

What is DNS Namespace?

The DNS Namespace is an inverted hierarchical tree-like structure that organizes an entire collection of DNS administrative domain names.

Moreover, the DNS namespace is part of the DNS system that organizes descending branches, which is very similar to the tree’s root.

Each branch is called a domain, and sub-branches are called a subdomain. Also, the term domain and subdomain are relative to each other.

In other words, we can define the DNS namespace as the total of all DNS zone, which is organized and administered in a hierarchical inverted tree-like structure and forms the DNS namespace.

What is the DNS lookup?

DNS lookup is when it sends a DNS query to find a specific domain name’s IP address.

When any browser or network device tries to find the hostname’s IP address, it performs a DNS lookup.

In other words, the DNS lookup is essentially checking the DNS zone, which is managed by different DNS servers for that hostname.

In another way, the DNS lookup is also finding all DNS records of a given domain name. The records include mostly A, AAAA, CNAME, MX, NS, PTR, SRV, SOA, TXT, and CAA records.

And, each football team has 20 players in the squad.

So, to contact each player in a team, you have to adopt a methodology.

Now, the football league organizer FZ wants the phone number of a player in team TA. Let suppose the player’s name is TA1.

The search process started with finding the manager’s name and phone number of each team.

The organizer FZ will need a list of the manager’s names and phone numbers for each team.

Afterward, they will contact the manager, MA, of Team A. Next, manager MA will return the phone number of player TA1 of Team A.

Compilation of the DNS Analogy

Now, the whole lookup process can be summarized by replacing its IP address and Domain names.

Now, when we combine all DNS zones, it will be termed as Namespace (Manager List).

But, organizer FZ has the manager’s name of all the team and is equal to NS Records (Name Server records).

The DNS zone is classified under two heads: 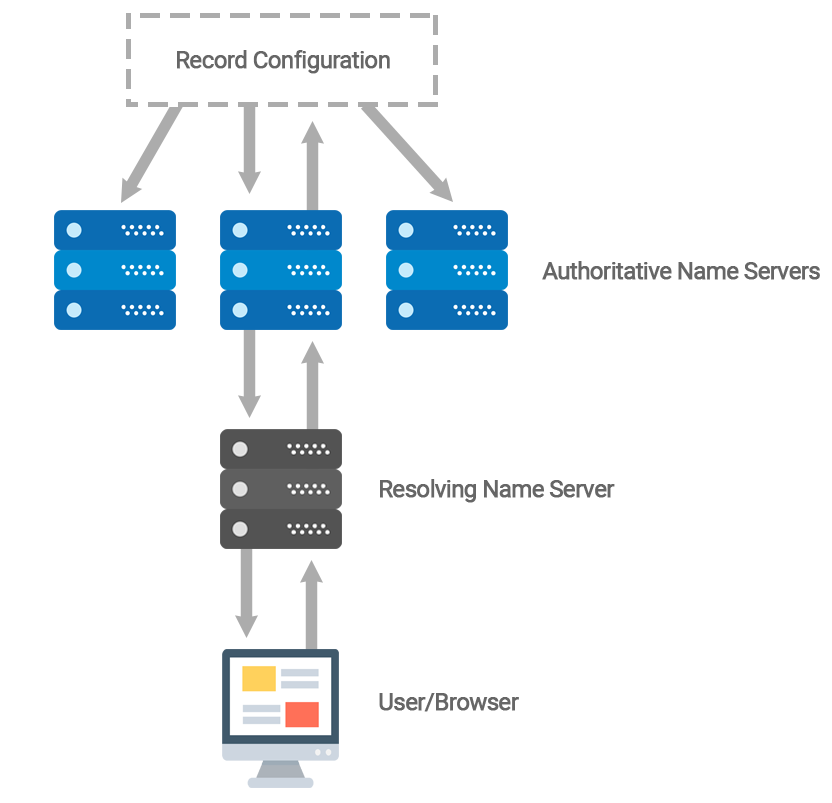 As we have discussed, the DNS zone is the portion of the DNS Namespace.

The primary DNS zone of the DNS Namespace is the original Read-Write Authoritative DNS zone.

Authoritative DNS server contains original DNS records that can be fetched at the time of the DNS lookup.

All types of DNS zone updates are possible only in the Primary DNS zone.

As we know that the DNS Namespace is one of the components of the Domain Name System (DNS).

At each level of the DNS Namespace, at least one DNS zone holds the domain’s DNS records.

Moreover, at each hierarchical level of the DNS system, there is a Nameserver that contains a DNS zone file that holds the DNS records of that zone.

Let’s look into different levels of the DNS Namespace and how the DNS zone is managed. 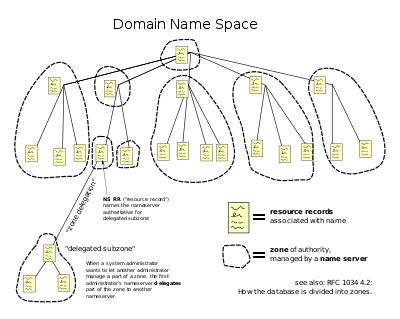 The Root in the DNS namespace is represented by a dot (.), and it is the start point of the Domain Namespace.

The DNS Root zone is operated and managed by logical DNS servers.

These DNS servers are responsible for handling any recursive DNS query and providing the requested details of the next level of the DNS namespace – the Top Level Domain (TLD) server.

The DNS Root zone is managed and run by organizations like Verisign, NASA, and the U.S. Army Research Labs.

In a TLD namespace, there can be multiple TLD zones. As we know, the Top Level Domain (TLD) can be .com, .net, .gov, or it can have country codes domain such as .uk, .us.

There are currently more than 1500 TLD domains, and each TLD has a separate DNS zone known as the TLD zone.

Moreover, the Top Level Domain and zones are managed by ICANN/IANA.

The second-level domain in the domain namespace is the one that was managed and operated by an individual or organization.

The second-level domain can be like google.com, yahoo.com, digitalmediaglobe.com, and likewise.

The organization can also run their own DNS nameserver or delegate the management and operation to the external provider.

A single domain can also have multiple sub-domain, which mainly belong to the same zone.

If we would like to separate a sub-domain to a different zone, it can be done easily.

Like, shop.digitalmediaglobe.com can be separated as a single independent website requiring separate DNS management and its own DNS zone.

What is the DNS Zone file?

A DNS zone file consists of a plain text file containing all the DNS records of the zone and every domain within the zone.

Moreover, the DNS file contains the domain names, IP address, and other details organized in the form of resource records (RR)

There are two types of DNS zone files:

In a DNS zone file, one record represents per line. Further, each DNS zone file must start with TTL (Time to Live), specifying how long the DNS records should be kept in the DNS server cache.

The DNS zone file consists of the below fields:

The DNS file structure must follow some of the rules.

When you add a record for a hostname, the hostname must end with a trailing period (.). For instance, example.com.(hostname or main domain name)

If the hostname does not contain a trailing period (.), it is relative to the main domain name. For instance, specifying “FTP” or “WWW” records does not need a period (.) at the end.

The comment in the DNS zone file will start with a semicolon (;).

Moreover, any new line in a multiple line comment starts with a semicolon (;).

The TTL decides how long to hold the current records before it gets refreshed. The DNS records are held in the DNS server’s cache.

Further, the SOA record specifies the detail of the primary authoritative name server for the DNS zone.

Other than the above two mandatory records, the DNS zone file can also have the below records.

It specifies the authoritative nameserver of all the domains in the DNS zone.

The nameserver contains details of the records corresponding to the domain name.

It points to an IP address (IPv4) corresponding to the domain name or hostname.

It points to an IP address (IPv6) corresponding to a domain name or hostname.

The CNAME record maps an alias name (secondary domain name or subdomain name) to a main or canonical domain name.

For instance, [email protected] is pointing to the digitalmediaglobe.com.

It points to an SMTP email server of the domain name.

The directive part starts with a “$” sign. There are three directives in the zone file.

The $TTL directive must appear before the SOA record and at the top of the zone file.

The example of the DNS file zone

What is a Reverse Lookup zone?

The reverse lookup zone works opposite to the DNS lookup zone. In this case, the lookup process starts to find the given IP address’s domain name or hostname.

Furthermore, the reverse lookup process takes place for spam filtering, bot detection, and troubleshooting. It just verifies the authenticity of the IP address.