When a piece of information or stream of data is transferred from one node to another node, it depends on both source and destination nodes.

The node can single group of nodes or all nodes in a given network. So, depending on the number of nodes in the sender and receiver end, the transmission types are divided into four types.

The “cast” in the above transmission types signifies the data or stream of packets transmitted from the client to the recipient end over a communication channel. 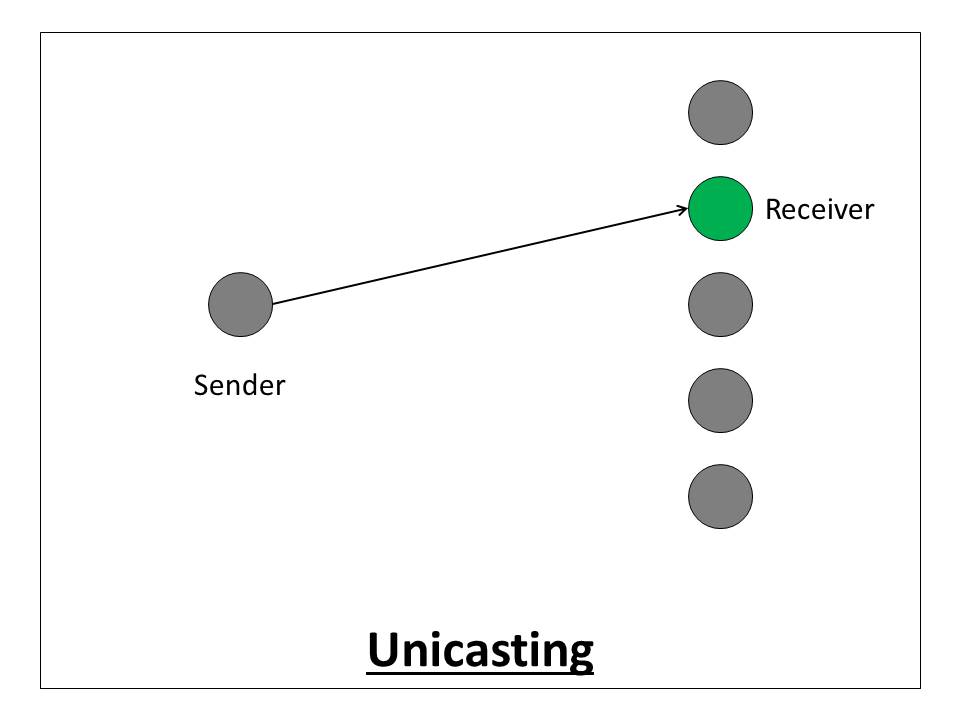 This is one of the most common transmission types on the internet. In Unicasting, there will be only one sender and one recipient.

You will find that Unicasting communication is established between one computer to another computer, one server to another server, and from client to server bases.

The type of protocol involved in unicasting is:

FTP (File Transfer Protocol) also uses unicasting transmission to transfer files from one node to another node on the network.

Similarly, the list of other protocols that use unicasting is HTTP (HyperText Markup Language), Telnet, and more.

Advantages and disadvantages of using Unicasting

The advantage of Unicasting is that it provides dedicated point-to-point communication and also maintains data privacy.

The disadvantage of Unicasting is that it cannot send messages to multiple devices. 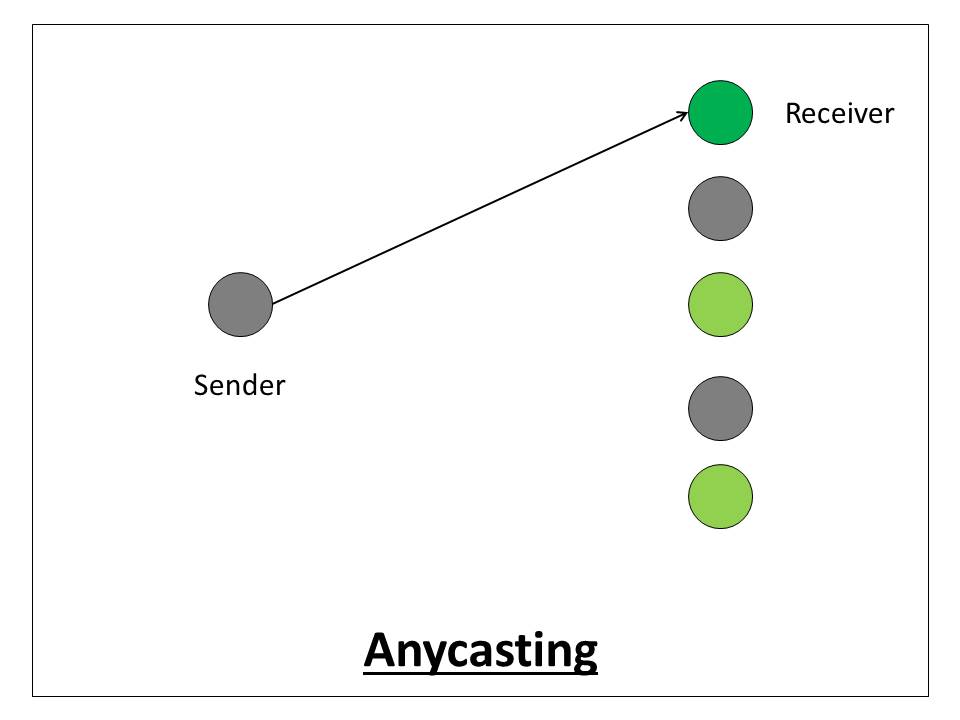 Anycasting is a networking technique in which the transmission occurs from a single source to the nearest destination amongst multiple possible destinations.

Moreover, Anycasting is used for only IPv6 addressing. Therefore, the IPv6 address is assigned to multiple devices in a network.

For instance, in the case of Content Delivery Network (CDN), Anycast sends the incoming traffic to the nearest data center.

Advantages and disadvantages for Anycasting

The advantages of Anycasting are that it reduces latency, improves redundancy.

Also, it is helpful in load balancing by dispersing the resources across multiple nodes in the same geographical distance.

The disadvantage of Anycasting is that it is complex and difficult to implement.

Further, Anycast creates ambiguity and extra overhead in the network for finding the nearest server or device. 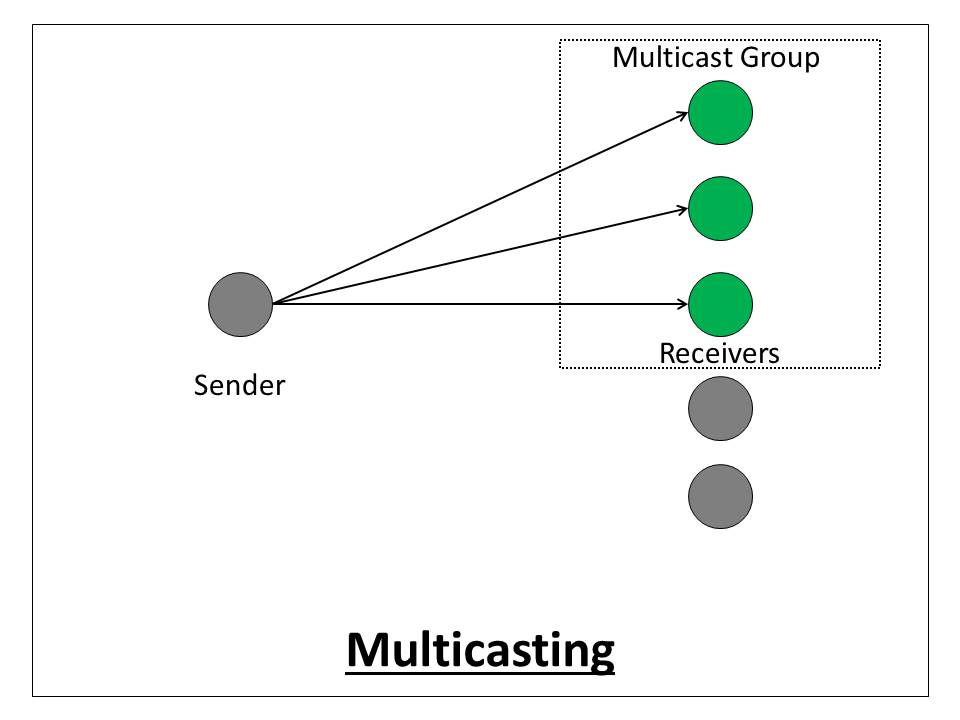 Multicasting is a type of transmission where a single source or multiple sources can communicate with multiple receivers or nodes in the network simultaneously.

Also, Multicasting communication can be one-to-many and many-to-many between sender or senders and receivers.

Moreover, the multicast receivers or nodes are the nodes who want the message from the source, and also it is distributed to a larger network.

Sometimes, Multicast is confused with Anycast. In Anycast, the source sends data to a single node only, although multiple nodes are available.

What is an IP Multicast?

When the Multicast is used over the Internet, then it is known as IP Multicasting. This is because this type of Multicast follows the Internet Protocol (IP) to transmit data.

Further, IP Multicast uses the mechanism of “Multicast trees” to transmit information from a single source to desired multiple receivers.

The IP Multicast is popular in Multimedia delivery and Stock Exchanges.

Advantages and disadvantages of using Multicasting

The advantage of using Multicasting is that it uses communication channels efficiently to deliver messages to the interested nodes in the multicast group.

The disadvantage of using Multicasting is that it is difficult to implement, and the formation of multicast groups can charge you extra overhead. 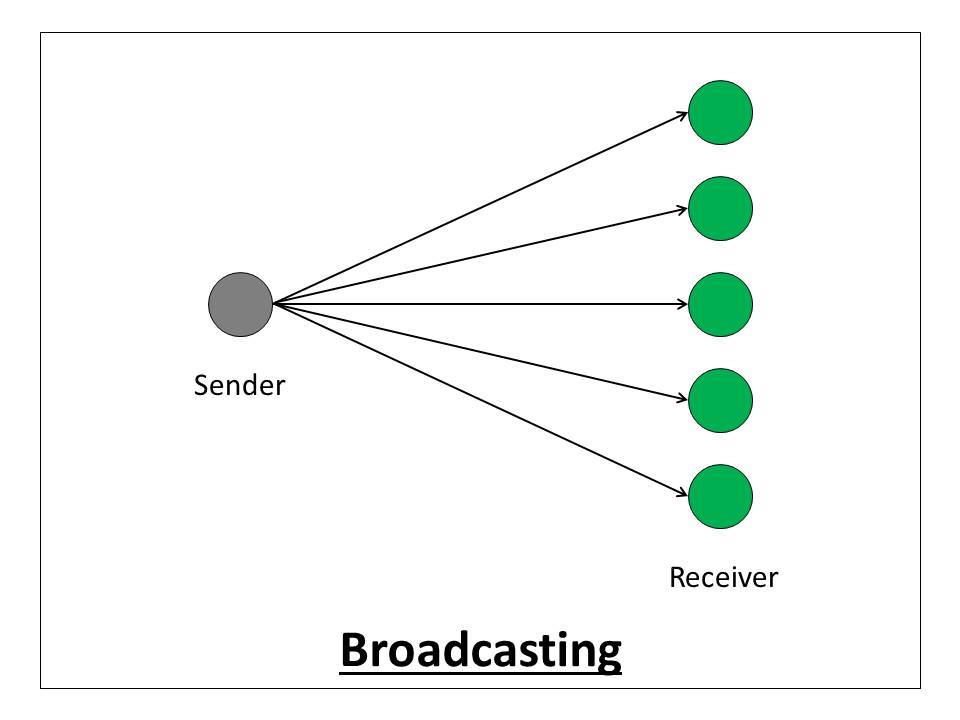 Broadcasting is the transmission type in which the traffic flows from a single source to all the receivers on the network.

Moreover, it is also known as one of many communication models in which the sending device can transmit data to all the devices in the network domain or broadcast domain.

The group of devices eligible to receive broadcast is called a broadcast domain.

When the device in a network domain wants to broadcast, it transmits the data packet to its broadcast address.

The network hardware such as routers and switches is responsible for transmitting data packets to every device in the group.

Additionally, all the devices in the network domain are eligible to transmit data to every other device. And, this type of communication is called all-to-all communication.

For instance, a LAN (Local Area Network) can be configured so that every device on the network can broadcast a message to all other devices.

There are mainly two types of Broadcasting in networking

It is used to send broadcast messages to all the nodes in the same network. The destination IP address for limited broadcast is 255.255.255.255.

It is used to send broadcast messages to all the nodes of another network.

The advantage of broadcasting is that it is easy to notify with messages to all the nodes in the broadcast domain at the same time.

Also, broadcasting is easy to implement and efficient.

The disadvantage of broadcasting is that it cannot be implemented in IPv6 addressing. Also, in most cases, it creates unnecessary traffic in the communication channel.