We know that radio wave is transmitted over the air to carry information from one node to another node in networking.

But, we don’t clearly know how radio wave is propagated and how it reacts within an environment.

During propagation, radio waves go through many obstacles or obstructions, which may impact the overall range and performance of the wave.

While installing and troubleshooting WLANs, it is good to know how radio waves have complexities and limitations.

Most wireless technology such as Wi-Fi, GPRS, Bluetooth, and GPS utilizes radio waves to transmit signals from one node to another node.

What are Radio waves?

The propagation of radio waves can be through air, liquid, vacuum, or even solids.

In addition, radio waves are the primary means to carry data over the wireless network.

Moreover, the radio waves are mathematically depicted as a sinusoidal waves.

The distance covered to complete one cycle of the sine wave is called wavelength. The height (or vertical distance) from the axis of the radio wave, namely the reach of maximum (or minimum) value, is called Amplitude.

Moreover, the number of the full cycle (complete sine wave) covered in a second is known as frequency.

The frequency is measured in Hertz (Hz) or cycles per second.

Let’s look into the deeper aspect of various attributes of radio waves.

As we know that Radio waves are the primary means to carry information from one point to another point.

But how is the information represented before it was transmitted through a medium like air?

The information in radio waves is represented by varying the following attributes with time.

The amplitude in the Radio wave indicates its strength and power. It indicates to what distance the radio wave can travel.

In other words, the amplitude of a Radio wave or any electromagnetic wave determines the height, force, power, and strength of the signal.

Further, it also defines the possible range of the wave according to its power and strength.

You can determine the wave’s amplitude by keeping the other factors like frequency, cycle, and wavelength constant.

The frequency in the Radio wave is the number of occurrences of a repeating wave (sine wave) per unit of time.

In other words, frequency in a Radio wave is the number of cycles undergone during one unit of time.

Moreover, the frequency is measured in Hertz (Hz), which denotes the number of cycles occurring per second. Earlier, frequency is represented as cycles per second (cps).

Additionally, the signal at these frequencies is not audible and visible to humans.

The phase of the Radio wave is defined when two or more wave is a form of the same frequency, same wavelength and of the same cycle but are not exactly aligned with each other.

So, Phase is not because of one RF signal, but there is an involvement of two or more RF signals that share the same frequency. Further, the Phase shows the relationship of the amplitude of two waveforms.

The Phase affects amplitude when we receive two or more radio waves. If multiple signals have a zero (0) degree phase, then the wave’s amplitude is combined to form the wave of greater strength.

If the multiple signals have a 180-degree phase, then the amplitude of the waves cancel each other out to form a signal of strength null.

For instance, if the two waveforms are 180 degrees out of phase or the phase difference of 180, then the two waves will cancel each other. 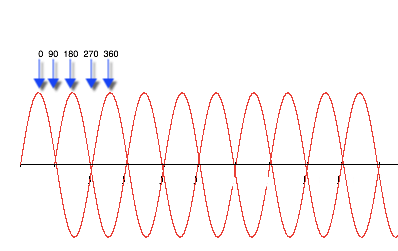 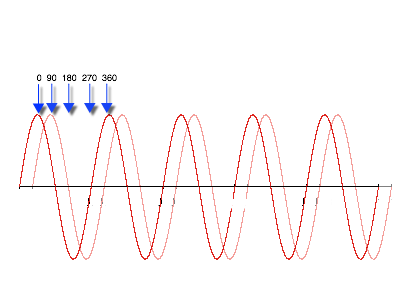 As we have stated that Radio waves carry data in the form of the sine wave. Further, the Radio wave can be transmitted from one end and received at the other end.

The transmitted data (such as audio or video) can be received only when the receiver matches it with the same frequency.

Also, the receiver examines the frequency or amplitude of the radio wave to get the transmitted data.

To understand better, you need to know how radio waves carry data. The radio wave that carries data is known as a radio carrier wave.

The process of modifying radio carrier waves using information such as audio or video is called Radio modulation.

The radio waves can carry data mainly in two ways.

Amplitude modulation is a type of modulation in which the radio carrier wave is modified by varying amplitude (intensity).

Frequency modulation is a type of modulation in which the radio carrier wave carrying information signal is modified by varying frequency.

The slight change in frequency represents different values it is carrying using a radio carrier wave.

The phase modulation occurs by varying the phase of the carrier in line with the modulating signal.

The FCC (Federal Communication Commission) regulates various radio frequencies and their uses. It is divided into different bands, and each band has a range of frequencies.

The frequency range of radio waves

Types of Radio waves are:

Extremely Low Frequency (ELF) radio waves have the least frequency in radio waves and have a long range.

The extremely low frequency and long wavelength of radio waves are extremely important to penetrate water and rock. It is useful in communication with submarines and inside mines and caves.

The natural source of ELF/VLF radio waves is lightning.

However, the low frequency (LF) and medium frequency (MF) radio waves are used in marine and aviation radio just as commercial AM radio.

This group of radio waves uses frequency modulation to bring excellent quality and not get affected by ecological components.

Short radio waves are formed by using the frequency in the HF band, from 1.7 MHz to 30 MHz.

It is mostly utilized in international broadcasting and to relay telephone and telegraph communication over great distances in ordinary telecom stations.

Some of the common radio devices use radio waves and their frequency range.

The behavior pattern of radio waves exhibits when they come in contact with objects.

We will look at how the behavior pattern change when it comes to contact with objects.

In the case of refraction, the radio wave is changed to a different angle. The most common example is that when it travels through the cloud.

Scattering occurs when the radio wave hits the rough surface or irregular surface and bounces off the surface in multiple directions.

Absorption occurs when the radio wave is lost because it is not reflected, refracted, and scattered from the object.

Diffraction occurs when an object in its path blocks the radio wave, then it is broken up and bends around the corner of the object.

The radio wave is most common for wireless communication by transmitting and receiving the modulated signal.

It is used in every aspect of our daily lives, such as AM or FM radio, mobiles, television, and more.

Moreover, complex technologies have improved the encoding capabilities of electromagnetic signals. Also, it improves the quality of information collected and secures the overall transmission.