Bits and bytes are often used in computer networking, computer storage, and memory.

But most of them are often confused about the difference between bits and bytes, Kilobits and Kilobytes, Megabits, and Megabytes are.

Bit and bytes both are used to measure the amount of data but in different contexts.

Bits are mainly used to measure the data transfer speeds in computer networking, like 80 Mbps.

Whereas, bytes are generally used to measure storage space and memory in computers like 250GB (gigabytes) in the hard disk.

But, this is not the only difference.

Let’s dive in to understand bits and bytes differences in different contexts.

How bits and bytes differ in writing?

In writing, bits, and bytes differs, which create most confusion to people.

You should remember that a byte is always an uppercase “B” and a bit is always in lowercase “b.”

The only exception for the above rule is kb; all are denoted in lowercase, kilobit.

To remember or to figure out the difference, always think that an uppercase “B” is physically more massive than the lowercase “b” as a byte is larger than a bit.

Bits and Bytes in computer networking

A bit, as a unit, used to refer to networking and downloading speeds.

Whenever we talk about data transmitted over a network, transfer of files in a network, and download and upload speed in broadband, then we are merely referring the measurement in bits.

But, how are the bits (digital signal) generated in a network during transmission of data?

The modern computer, nowadays, generates bits by using the various pattern of voltage or current levels into digital signals that represent 0s and1s during transmission of data. This process is also called the encoding of data.

The generation of bits (1s or 0s), that is, digital signals, may vary in a different medium.

Similarly, Fiber connection uses pulses of light to generate bits, which get transmitted over a network as a digital signal.

So, based on the file size and downloading speed, you can easily estimate how long it will take to download or upload a file.

For instance, you have a 20 MB file size to download, and the connection speed is 20 Mbps, then it doesn’t mean that it will take one second; instead, it will take eight times one second (1 byte = 8 bits).

Because a megabyte (MB) is eight times bigger than a megabit (Mb), so, theoretically, it will take 8 seconds to download 20 MB file size with a connection speed of 20 Mbps.

Let learn how bits and bytes play a role in computer networking.

The IP address in computer networking

We have heard of IP address whenever we talk of internet connection or local area network (LAN).

An IP address, termed as Internet Protocol address, is an identity given to a computer in a network so that it can interact within a network or internet. 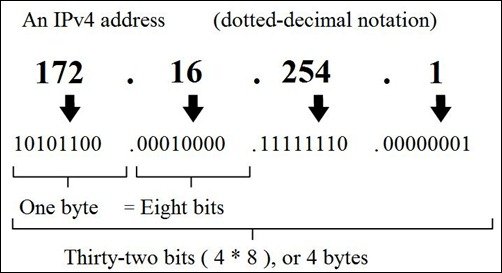 Transfer of files in networking

The transfer of data in computer networking is usually measured in units of bits per second (bps).

For instance, if you have 80 Mbps internet connection speed, then the downloading speed you will observe is 10 MB/s.

Now, it is clear that all type of communication in a network is in bits. But, when we talk about storage and memory in the computer, the scenario is different.

Bits and Bytes in Computer Storage and memory

A byte, as a unit, used to refer a storage space and memory in a computer.

But, why byte is used to measure the storage space and memory in the computer.

As we know, a bit is a binary digit, which holds any of the two values: 0 and 1. And, also it is the smallest unit in a computer that is used for storage purpose.

But, a single bit can’t represent everything.

So, to represent complete information and to include every character, we combined 8 bits to form 1 byte.

Now, the question arises why we grouped only 8 bits to form 1 byte.

So, 8 bit can store any of the 256 characters ( 2 to the 8th power). That’s why byte is used as a standard measurement unit.

How to convert bits and bytes on the computer?

Because of computer use binary (base of 2) instead of decimal (base of 10).

Now, as per the above rule, you can easily convert bit and bytes value.

Why my hard disk showing a different number?

Most of the drive manufacturers use a decimal number system to define the storage capacity, but when you put the hard disk on the computer, it shows a different number.

Because computers use a binary number system to measure the capacity of the hard disk, so, the discrepancy is not because of malfunction, but its a matter of conversion.

For instance, if you have purchased 10 GB hard disk, then according to manufacturers, the storage capacity would be 10,000,000,000 bytes. But, the computer will acknowledge different values.

So, when we convert manufacturer storage capacity, that is, 10 GB (decimal value) into a binary system, then the value would be 9.31 GB. According to the computer, 9.31 GB would be the actual capacity you would be holding.

The preferences of bits and bytes may differ in the different scenarios, but the relation it holds remains the same, which is 1 byte = 8 bits.

The representation of bytes and bits are always in uppercase (B) and lowercase (b) letter.

Another important thing to remember, the transfer of data in networking is mostly calculated in the decimal value (base of 10). But, the storage or memory in a computer is calculated in a binary system (base of 2).